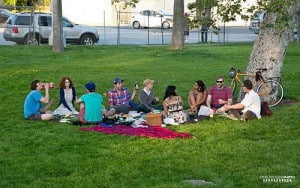 Yes, yes, the word “hipster” has been used past all meaningfulness, but that doesn’t mean it is meaningless. Let’s use it here for: young, trendy, college-educated, mostly white folks who are somewhere in the process of segueing their youthful alternatively into their specific version of the American capitalist dream (see: Generation X in years past). So what everyone wants to know about those people is: where do they want to live? Because wherever they want to live is going to become the place where everyone else wants to live (see: Silver Lake, Echo Park, and now Highland Park).

The pattern of trendsetters moving into a new, usually “cheap,” neighborhood, drawing in the trend-followers behind them liked hipster Pied Pipers, and finally attracting real estate investors and well-capitalized businesses, is known more commonly as “gentrification” and has very serious consequences for the original residents of those neighborhoods, and for the character of the city as a whole. In a surprisingly insightful blog post(via LAist), “Real Estate Agent to the Hipsters” Tyler Harman lays out their unexpected new frontiers, now that the northeastish ‘hoods are so over. (Forbes, for god’s sake, anointed Silver Lake years ago.)

Already high-priced Highland Park is “still incredibly popular and increasing,” although the more cautious wave of trendy folks, the “young professionals that change clothes after punching the clock,” is still waiting “until the area has been a little more sterilized.” But “[l]ong before the hype” even began there, the trendsetters had already begun a migration “across the Arroyo River into East L.A. into neighborhoods like Lincoln Heights and El Sereno.” Not long after, investors saw the opportunity and got to work hipster flipping the houses in those areas. Harman says he’s already seen trend-followers start to follow that trend.

Far more surprisingly, Harman is seeing the hipster forefront move “into Western Pasadena & Altadena in an area called the ‘Lincoln Corridor’.” And already “There is a very large concentration of investor flips that are driving up prices”—the normal course of gentrification seems to have reversed, with the hipster-friendly housing arriving first.

But in a city as large and filled with low-income neighborhoods as Los Angeles, there are always new places for hipsters to colonize. Harman predicts that “soon they will start venturing south of The 10 Freeway and underneath Downtown L.A.” into South LA. Good lord.