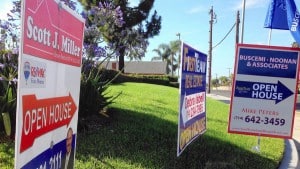 Southern California’s housing market continued its upward climb in August, with both home prices and sales rising compared to a year earlier, according to a report released Wednesday.
The figures from real estate data provider CoreLogic also sustained a trend evident for most of the year: slowing price appreciation even as sales continue to gain momentum.

Sales across the six-county Southland climbed 8% from August 2014. That’s the seventh straight month of increases and the longest such stretch since late 2012 through early 2013.

Economists have welcomed the slowdown in price appreciation from the double-digit rates of recent years. The more moderate gains signal a housing market that’s normalizing after years of dramatic swings.

Meanwhile, an improving economy has given more families the confidence to make what is often the biggest purchase of their lifetimes, economists said.
The housing market has improved nationally as well this year. In July, sales of previously owned homes reached an eight-year high. And on Wednesday, the National Assn. of Home Builders reported single-family builders haven’t been this confident since the housing bubble.

Regionally, sales and prices were up in all six Southern California counties. In Orange County, the median price rose 4.3%, while sales increased 3.4%.

Article courtesy of the LA Times