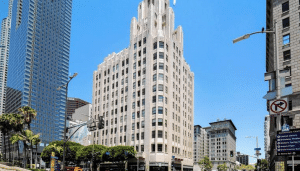 The last time an apartment building in downtown Los Angeles was converted to condominiums was 2006 — shortly before the housing bubble burst.

But now, with young professionals pouring into the up-and-coming neighborhood, an acute shortage of condos has prompted the owner of a landmark Art Deco-style apartment tower to put 74 units up for sale.

Apartments at the Title Guarantee Building rent for as much as $6,100 a month for a penthouse, but real estate investor Admire Hill figures it can make even more money selling the units. Prices are expected to start at $500,000 for a 750-square-foot unit at the building at 5th and Hill streets.

The move by the Los Angeles real estate investment firm represents a turnaround for a market that fell off a cliff during the financial crisis and took years to recover. Several downtown buildings that were being developed for sale were instead converted to rentals.
411 W. 5th Street, where the 1929-era Title Guarantee Building is being converted from apartments to condos.
The last conversion, in 2006, was the Textile Building Lofts at 315 E. 8th St., according to Polaris Pacific, which is marketing the Title Guarantee condos.

In July, there were only 125 previously occupied condominiums on the market, according to a report by the Mark Co. That is only about a 3.6-month supply, far less than the six months considered a healthy balance of buyers and sellers. The neighborhood has a stock of about 5,600 condos.

The firm is moving fast and plans to put units on the market early next month — before other developers seek to cash in on the boom. Nearly 2,000 condo units are under construction and another 3,000 are in the planning stage; none will be ready for occupancy until 2017.

That increasing supply, however, could clash with waning demand if the flagging stock market damages the broader economy. The Dow Jones industrial average has fallen 9.5% in the last five trading days.

Admire Hill bought the Title Guarantee Building in 2012 for $29 million, according to real estate data provider CoStar. A prior owner spent a reported $38 million turning the old office building into condos in 2007 but lost the property in foreclosure to Bank of America. The bank, which has been operating it as a rental, sold it to Admire Hill.

See the most-read stories this hour >>
Completed in 1930, it was designed by John and Donald Parkinson, whose firm is credited with designing City Hall, Union Station and other local landmarks. They employed such Gothic touches as shields and gargoyle-like rainspouts and crowned the building with a Gothic tower complete with stylized flying buttresses.

The Los Angeles Conservancy considers it one of the leading Art Deco structures in Los Angeles.

Floors of the former office building were divided into individual units with kitchens and bathrooms, and are loft-style, without separate rooms. They have polished concrete floors and high, exposed ceilings. Parking is to be provided by valet.

The building is now about 80% leased to renters, who will have the option to buy their units when they go on sale, Admire Hill Managing Partner Richard Kim said. All remaining long-term apartment leases will expire by the end of the year.

The median price for a downtown condo for the three-month period ended July 31 was $587,750, according to Polaris Pacific, up 5% from the year before.

The recent price appreciation only partially reflects the radical changes downtown, which existed for decades primarily as a hub of fancy high-rise office buildings active only on weekdays.

It has evolved over the last 15 years into a more conventional city center with a substantial residential community, along with new restaurants, bars and shops to serve them. The population has nearly doubled since 2000 to more than 52,000 residents, according to an estimate by the Downtown Center Business Improvement District.

Still, it’s unlikely that downtown will see a larger wave of conversions, said Alan Mark, a condo marketing specialist who is not involved with the Title Guarantee Building. Condos that were converted to apartments during the last downturn are fetching attractive rents, he said.

“The rental market is strong,” Mark said. “I don’t think more conversions will happen right away.”
Among the rentals are other historic former office buildings, including the Roosevelt and the Brockman Lofts. There are also new towers dating from the last boom that are being rented instead of sold, such as Apex (once known as Concerto) and WaterMarke Tower. Rent for a studio apartment at the Apex starts at about $2,400 a month. One-bedroom units at the WaterMarke begin at about $3,000 a month.

The shortage of condos for sale has created serious challenges for buyers. Puyi Tam, who moved to Los Angeles in late 2012, wanted to buy downtown because it reminded her of her previous home in New York City — lofts, restaurants and a bustling street life.

The 42-year-old call center supervisor first rented an apartment in Glendale while she looked for a place to buy.

But more than a year dragged on, and she came up empty in her $350,000 price range. “I couldn’t find anything,” said Tam, who ended up buying a loft just north of downtown in Lincoln Heights. Then last March, she sold that unit and decided to look for two-bedroom home so she and her 2-year-old daughter would have more room.

She set her eyes on downtown again — this time willing to spend $550,000 for a two-bedroom. But again, she couldn’t find something suitable.