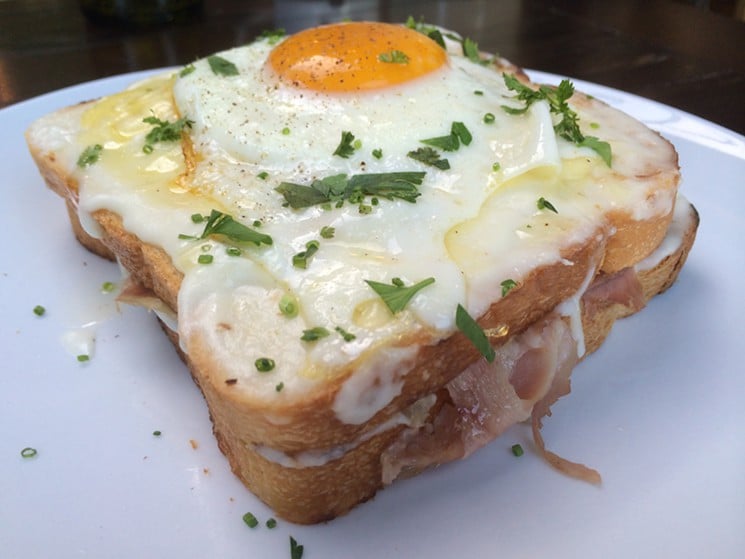 Don’t succumb to monotony for breakfast. Sure, some people can happily start every day with avocado toast, or a cup of yogurt, or even by downing a quick cappuccino. But you’re clearly not that person, are you? Here are the 10 best L.A. breakfasts that are worth the extra time and money, meals that won’t just break the fast but will ensure that the most important meal of the day is never a boring one.

10. Nick’s Cafe
Nick’s Cafe is located on the dusty edge of Chinatown, across the street from where the Southern Pacific Railroad built a passenger depot in 1875. The L.A. State Historical Park now stands where the depot stood, and the only trains in the area are the ones running on the Gold Line tracks, but that doesn’t mean the history is gone. To the contrary, Nick’s is a diner that doesn’t need to manufacture a mid-20th century feel because it actually is from the mid-20th century. It opened in 1948, in fact, with enough photos of trains and railroads to provide the requisite diner nostalgia. Nick’s is a great diner to visit if you want a step up from your neighborhood greasy spoon, particularly if you’re in the mood for ham and eggs. LAPD officers often take up counter space the way the squad did when it was protecting and serving selected populations under the command of William H. Parker. Some things don’t change.1300 N. Spring St., Chinatown; (323) 222-1450, nickscafela.com. —TN

9. Jon & Vinny’s
In some ways, Jon & Vinny’s is the simplest restaurant from chefs Jon Shook and Vinny Dotolo, whose empire includes Animal and Son of a Gun. They’re also serving three meals of Italian-American comfort food a day — and baking in-house. At breakfast, stone-ground porridge comes from Kenter Canyon, served with toasted almonds, sweet Gaviota strawberries, orange blossom honey and a small pitcher of either almond or whole cow’s milk. The potato on their breakfast pizza is buttery Yukon Gold from Zuckerman, seasoned with rosemary, olive oil, Parmesan and red onion and served on a chewy crust. For their BLD, fat slabs of grilled Gjusta ciabatta host Niman Ranch bacon, an olive oil fried egg with vivid yellow yolk, ripe tomato, arugula and aioli. Before you order, be sure to scope out the pastry case, which offers tantalizing items like bombolone, honey dates scones or Dave’s banana bread, both with salted butter. 412 N. Fairfax Ave., Fairfax; (323) 334-3369, jonandvinnys.com. —JL

8. Square One Dining
When it first opened, Square One’s major contribution to breakfast was its “bacon-enriched caramel sauce” drizzled on top of its fluffy pancakes. Now that everything is saturated with bacon, you thankfully are free to order something else without the annoyance of being told you’re missing out on a once-in-an-L.A.-lifetime moment. That’s not to say the pancakes aren’t good, because they really are, but so are the baked eggs served in individually-sized cast-iron skillets. The most unexpected find: the fruit bowl, which lives up to Square One’s seasonal and organic ethos with plump fruits actually in season and not, say, oversized chunks of pale melons and mealy strawberries. The view of the Scientology building across the street, so cartoonishly blue and unconvincingly imposing that it looks like it should have co-starred in Starship Troopers, is a bonus. 4854 Fountain Ave., East Hollywood; (323) 661-1109, squareonedining.com. —TN

7. Salt’s Cure
This is the ultimate local’s restaurant: All the ingredients, from animal to vegetable, are sourced from somewhere within California, then butchered or sliced, or both, as necessary. The breakfast menu changes every morning, but for those Type A personalities who do not like surprises, however pleasant, someone usually is diligent about Facebooking a photograph of the following day’s menu. You can count on a few dishes to show up in most of these photos, including the 2x2x2 (two eggs, two bacon slices and two sausage patties) and the hearty and thoroughly delicious oatmeal griddle cakes. They’re planning to move in fall 2015 into the old Ammo space on Highland, but for now, they remain at their Santa Monica Boulevard digs. 7494 Santa Monica Blvd., West Hollywood; (323) 850-7258, saltscure.com. —TN

6. Eggslut
If you arrive at Eggslut and there’s no line, that probably means they aren’t open for business. Chef Alvin Cailan and cousin Jeff Vales have become the biggest phenomenon to emerge at downtown’s revitalized Grand Central Market. No matter what you order for breakfast, it’s “eggs on the regs.” The signature Slut dish features a Mason jar with lightly cooked egg and buttery potato puree, served with a baguette for dipping. Breakfast sandwiches are by far the more popular option, available on either a flaky house-made buttermilk biscuit or Sugarbloom Bakery brioche bun. The Fairfax, named for the street where Eggslut used to park back when they operated as a truck, stars soft scrambled eggs, chives, molten cheddar cheese, caramelized onions and Sriracha mayo. Even if there is a line, wait in it. Downing one of Eggslut’s breakfast sandwiches is a rite of culinary passage in L.A. 317 S Broadway, downtown; eggslut.com. —JL

5. Farmshop
If you’re not in the top 1 percent, but it’s your birthday and you have a dear monied friend who will buy you breakfast at dinner prices, head directly to the Brentwood Country Mart. There, Farmshop’s fantastically luxurious breakfast offers superb versions of the classics. The French toast is one of the best French toasts we’ve ever had, and comes with whipped crème fraiche, pistachios and bacon. Coddled eggs are specifically on the menu, but really, all the eggs at Farmshop are coddled with the utmost care. Scrambled, they’re as light and fluffy as they look when Jacques Pepin does it on public television; shirred, they’re perfectly baked, with the whites firmly set and the yolks slowly oozing. High prices come from the high quality, high-brow ingredients. And, well, you’re in Brentwood. Happy birthday. 225 26th St., Santa Monica; (310) 566-2400, farmshopca.com. —TN

4. Gjelina
Weekend brunch is practically gospel at the L.A. restaurant that best captures the quintessential California lifestyle. However, many of the same wonders are available for daily breakfast at this restaurant from Fran Camaj and chef/partner Travis Lett. You’ll find the same photo-friendly light, open-air back patio and reclaimed barn wood as you will at brunch, lunch or dinner. The menu strikes a balance between light dishes like poached eggs with sautéed kale and heartier fare like onion bialy with crispy egg, pork belly, tomato harissa and Fontina. Pancakes are a strength, including tangy lemon buckwheat ricotta pancakes with crème fraiche and blueberry compote. It’s also possible to just load up on pristine oysters if you prefer. 1429 Abbot Kinney Blvd., Venice; (310) 450-1429, gjelina.com .—JL

2. Republique
Chef Walter Manzke and his wife, Margarita, don’t offer full-service at breakfast, but it’s not like they’re holding back at the grand Hancock Park restaurant they run with restaurateur Bill Chait. As soon as you pull back the heavy front door, a long counter entices with pastries and sweets that could include a croissant that riffs on the Cubano sandwich, towering chocolate cake with cascading salted caramel or a seasonal doughnut. The croque-madame features house-cured ham, molten gruyere and a runny fried egg. Shakshouka is an Israeli classic with stewed tomatoes and peppers, black kale, yogurt, cilantro and a fried egg — served with a baguette to drag through the saucy broken yolk. And kimchi fried rice is loaded with fat beef short rib, with a soft egg on top. 624 S. La Brea Ave., Hancock Park; (310) 362-6115, republiquela.com. —JL

1. Huckleberry
For the best ham and eggs in L.A., go to Nick’s; for the best green eggs and ham, go to Huckleberry, Rustic Canyon’s sunny, almost disarmingly friendly kid sister. Be forewarned that it is perpetually crowded, especially on the weekends, when you might be better off picking up something to-go (like the rest of the Santa Monicans) and eating it curbside (like the rest of the Angelenos). Whatever you pick up, it’s bound to be good. The pastry case is filled with delicious treats like croissants and doughnuts and scones, and you can’t really go wrong with anything on the chalkboard menu. Try the brisket hash, or the aforementioned green eggs and ham (pesto supplies the green, La Quercia prosciutto provides the ham). We would eat those green eggs and ham in a boat, with a goat, in the rain, in the dark, on a train … 1014 Wilshire Blvd., Santa Monica; (310) 451-2311, huckleberrycafe.com. —TN 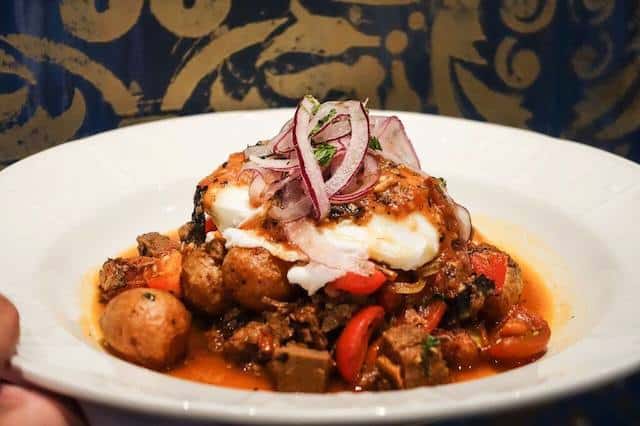 Where To Find Your Eggs And Other Delicious ...

Mar 25, 2016
Where To Find Your Eggs And Other Delicious Bites For Easter Brunch While some of you my be busy stuffing your face ...
Continue reading 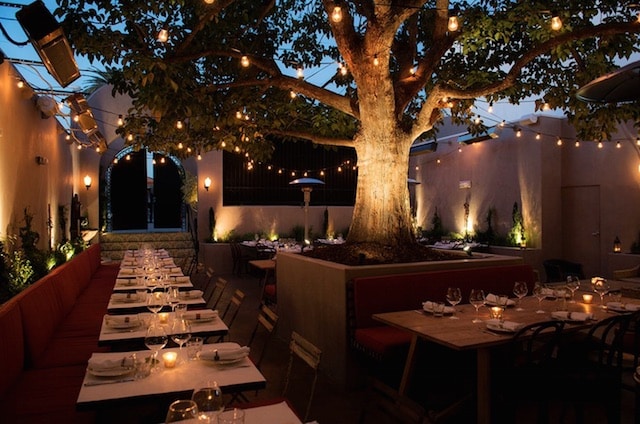 Feb 09, 2016
Valentines Day is just around the corner! LAist has compiled a list of 14 of LA’s Most Romantic Restaurants. ...
Continue reading 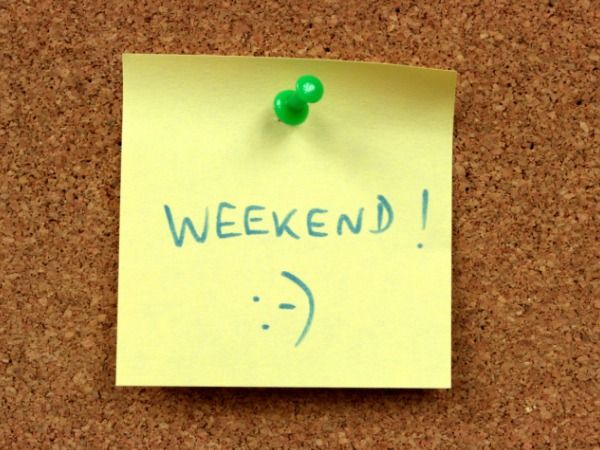 Feb 05, 2016
Need plans for the weekend? Checkout some of the cool stuff going on this weekend in LA. Click the link below to se ...
Continue reading