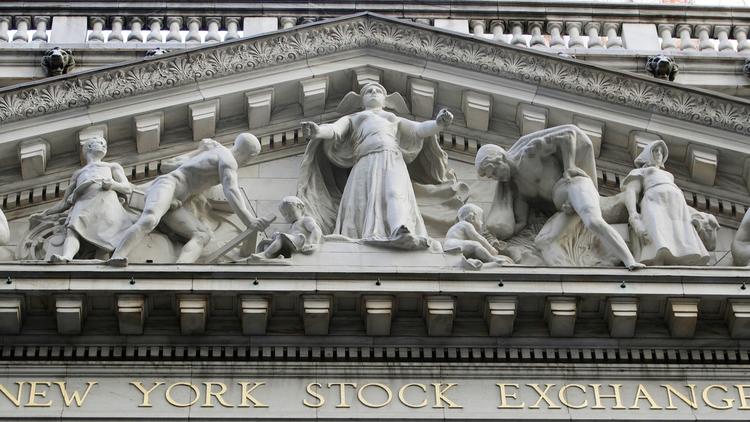 Banks and healthcare pull stocks down

U.S. stocks are in decline Tuesday morning as Johnson & Johnson and Cardinal Health lead healthcare companies lower and weak trading results from Goldman Sachs drag down bank stocks. Stock indexes in Europe are tumbling after the British government called for a surprise early election next month.

Stocks are coming off their biggest one-day gain since March 1, when all four major indexes set record highs. They’ve mostly traded lower since then.

HEALTHCARE WOES: Healthcare products giant Johnson & Johnson fell 3.2% to $121.67 after investors were disappointed with its sales. The company’s revenue was weaker than expected as sales of its Crohn’s disease drug Remicade declined 6%. The company also said growth for many consumer health products slowed down and payers demanded bigger rebates on treatments for cardiovascular ailments and diabetes and other primary care products.

Prescription drug distributor Cardinal Health sank 11.5% to $72.43 after it said it will reach the low end of its profit estimates for this year and it projected a smaller profit next year, partly because drug prices continue to fall. The company also said it will pay $6.1 billion to buy Medtronic businesses in products for patient care, deep vein thrombosis and nutritional insufficiency. Those products have a combined $2.3 billion in annual sales.

BANKS STRUGGLE: Goldman Sachs had a rare miss in its first quarter results, as its typically best-in-class trading desks did not perform as well as its competitors. The financial firm reported a drop in revenue from stock trading and its overall revenue wasn’t as good as investors expected. The stock slid 3.8% to $217.56. It’s up more than 35% over the last year and reached all-time high above $250 a share in March. Goldman has been a major contributor to the Dow’s post-election gains.

WHAT ELSE IS ON? Streaming video company Netflix sagged 2.2% to $144.08 after it didn’t gain as many subscribers in the first quarter as investors hoped. Its second-quarter profit guidance also fell short of analyst estimates.

EUROPEAN ELECTIONS: British Prime Minister Theresa May called for an early general election in June, which she had recently said she wouldn’t do. May formally triggered Britain’s exit from the European Union last month, and she intends to seek a stronger parliamentary mandate.

The pound climbed after May’s announcement on the hope that the election will result in May getting a better deal for Britain in the Brexit talks. It rose to $1.2743 from $1.2563.

European stocks fell. The unexpected vote creates even more political uncertainty in Europe as the first round of French presidential voting will be held Sunday. Polls don’t give a clear edge to any of the four leading candidates. The top two will advance to a May 7 runoff, and investors are unsettled by the chance that a far-left or far-right candidate could pull off a victory. Britain’s FTSE 100 was down 2%, and France’s CAC 40 lost 1.3%. In Germany, the DAX shed 0.7%.

U.S. ECONOMY: The Federal Reserve said industrial production posted a solid gain in March, but a closely watched gauge of manufacturing fell for the first time in seven months because of a steep drop in production of cars and car parts. Meanwhile, the Commerce Department said builders broke ground on fewer homes in March, but construction of houses remains faster in 2017 than it was the year before.