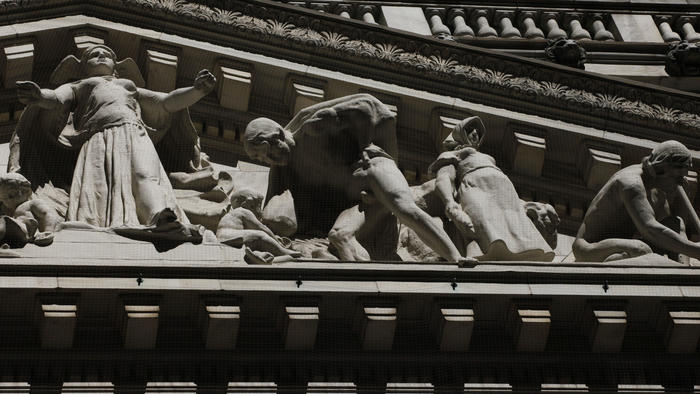 U.S. stocks broke a three-day losing streak Tuesday and ushered in the new year with broad gains. Healthcare stocks, which struggled for most of last year, climbed.

Stocks started the day with a surge as the Dow Jones industrial average rose 175 points in the first hour of trading. Bond yields jumped, which took bank stocks higher. The price of oil also rose early in the morning, but it soon began slipping. Investors started buying again late in the day, however, and major indexes closed with a flourish.

Energy companies, banks and technology companies made some of the largest gains, and traditionally lower-risk investments such as utility companies lagged behind the rest of the market. That’s a sign investors expect stronger economic growth.

The S&P 500’s healthcare index fell 4% last year. The S&P 500 itself rose 9.5% for the year, and all of its other industrial sectors rose at least a small amount.

Investors have been avoiding drug company stocks because they’re worried that the government will intervene to reduce prices. But Cavanaugh said the stocks are appealing because they’ve been reporting better growth than most other industries.

“If you look at earnings and revenues, they’re one of the leaders,” she said.

Xerox surged 19.8% to $6.89 after the company split itself in two, a move it announced almost a year ago. The original Xerox kept its printer and copier business. The second company will focus on business process outsourcing, providing payment processing and other services. Xerox will receive $1.8 billion in cash. The new company, Conduent, now trades under the ticker symbol “CNDT.” That stock sank 7.9% to $13.72.

The manufacturing sector continued to recover and ended 2016 on a strong note. The Institute for Supply Management said its manufacturing index rose to 54.7 in December, its highest reading of the year. That was the fourth straight month of expansion and the ninth out of the last 10. The result was a bit stronger than analysts expected.

Santa Clara, Calif., graphics processor maker Nvidia slid 4.4% to $102.01. The stock more than tripled in value last year, but it hit a wall in the year’s final days of trading. It’s down 13% since Dec. 27, when it closed at an all-time high.

Bond prices fell slightly. The yield on the 10-year Treasury note rose to 2.45% from 2.43% late Friday. Yields made a much bigger move earlier in the day.

Utility companies fell Tuesday, and real estate investment trusts and companies that sell household goods rose less than the rest of the market. Those stocks are often compared to bonds because they pay large dividends, but the jump in yields Tuesday encouraged investors to look elsewhere.

Article by the Associated Press.