If you are looking for an upscale gated community that is still secluded, private, has amazing views and natural feel, Bell Canyon is a place you must see.

Bell Canyon is a beautiful equestrian community situated in the eastern Ventura County, with the main access through the Los Angeles County communities of West Hills and the western San Fernando Valley. With gorgeous hills, Bell Canyon sits at an elevation of 1,368 feet (417 m). The 2010 United States census reported Bell Canyon’s population was 2,049. According to a 2016 study, Bell Canyon is the seventh wealthiest community in the state of California with an annual median income of $230,000 However, incomes in this area are commonly upwards of millions of dollars a year. 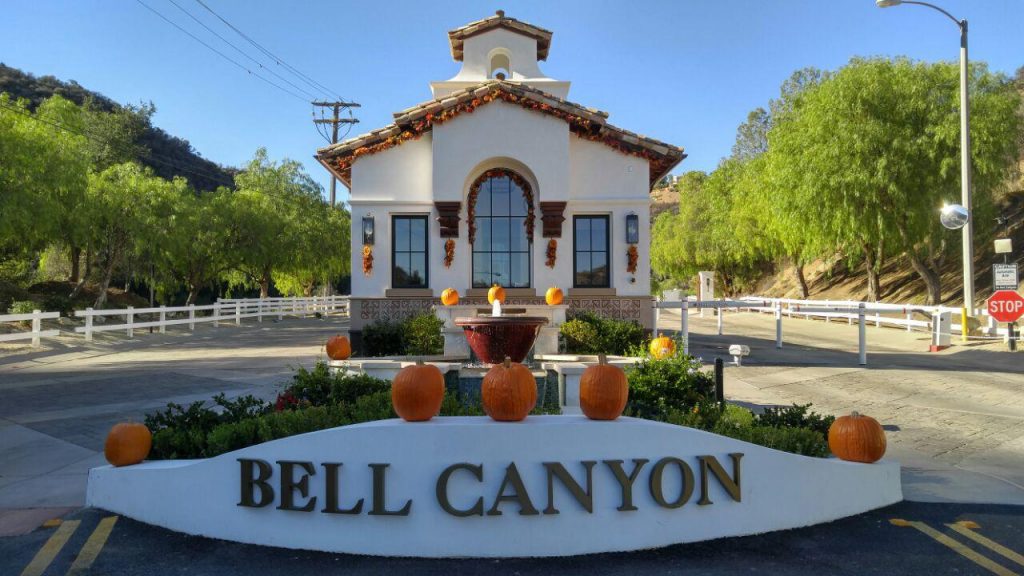 Bell Creek, a ‘national parkland blue line stream’ and a significant tributary to the headwaters of the Los Angeles River, winds its way through the community and plays host to wildlife such as deer, coyote, hawks, squirrel, fox, woodpeckers and quail in its riparian habitat. Bell Canyon is an important part of the crucial Simi Hills Wildlife corridor linking migrations between the Santa Monica Mountains and Santa Susana Mountains.

There are many hiking and riding trails around the community, some of which border the Upper Las Virgenes Canyon Open Space Preserve Park connecting to the south and west. The Bell Canyon Trail extends 4.5 miles (7.2 km) north from Bell Canyon Park, with a surface of sand and dirt and a width of 12–14 feet for easy rides. The Canyon Trail is scenic and winds through the lush California native plants vegetation of Bell Canyon, dominated above by California Sycamore trees and the coast live oak woodlands.

Private, gated Bell Canyon is an extremely affluent area of approximately 800 estates and lots, equestrian properties and mansions, each on a 1/2 acre to 40-acre (160,000 m2) parcel. Many of the area’s equestrian properties have stables, paddocks, turnouts and other horse facilities. It’s compared to nearby Hidden Hills a few miles to the south. Both Bell Canyon and Hidden Hills have 24-hour staffed entrance gates, night-time patrols, and spacious residential zoning. Bell Canyon’s management has stated that the community is now among the most secure, state of the art gated communities in the United States. Bell Canyon’s other differences are: unique topographic features; stream and waterfall, higher hillside elevations; privacy; and several architecturally notable houses designed by architects including Marshall Lewis, Don Zavatto, Ed Niles, Robert Byrd, Blair Ballard, Buff and Lensman, Ray Kang and pioneer of the post-war California ranch-style house, Cliff May.

At the heart of the community is the Cliff May designed Bell Canyon Equestrian Center with stables, riding arenas and turn out areas.. Built in the early sixties, this facility was restored via a $537,000.00 renovation project that took nearly two years to complete. It is one of the few remaining full-service equestrian centers in the area. The grounds, which can accommodate up to 120 horses, feature four barns with 80 stalls, 12 x 24 corrals, three sand riding arenas, two enclosed bullpens and hot walker, and tree shaded picnic areas.